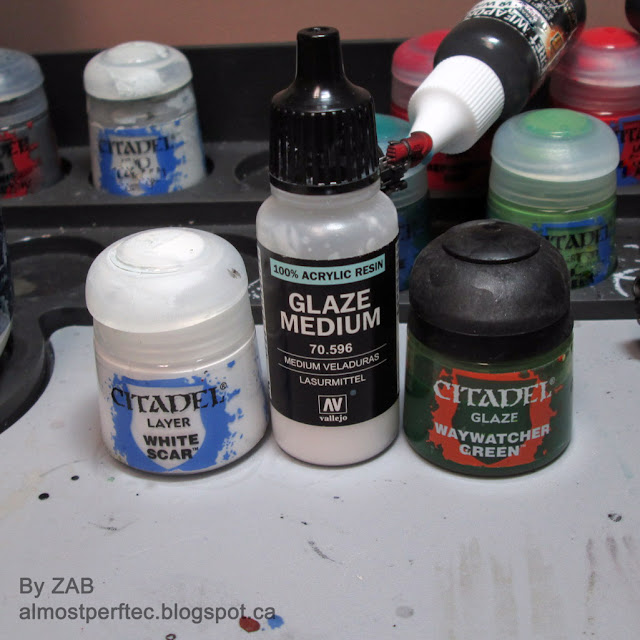 Man were the lenses easy to paint! Good thing too, there were a lot. Paint white on the lens. Flood the area with Waywatcher Green Glaze. That's it...


You could take it further, but these were for gaming and we were asked to keep things simple so it is easy for whoever wins this army to paint up and add units to it ;)

The purity seals were next. there were only slightly less of those. They went fast too though... 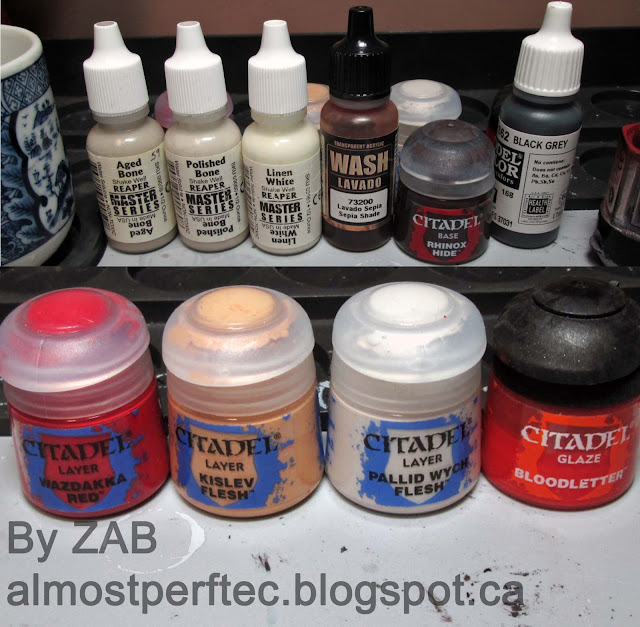 Paper first with simple layering of Aged Bone, Polished Bone and Linen White. Then the text was added with a thinned down Rhinox Hide & Black Grey. I also used Wazdakka Red to add illuminated text in areas. Then the whole thing was washed with Sepia wash. The wax seals were done with a basecoat of Wazdakka Red and then a 1:1 highlight of Wazdakka Red & Kislev Flesh, then a final highlight of 1:1:1 Wazdakka Red & Kislev Flesh & Pallid Wych Flesh. Finally 3-5 glazes of Bloodletter made them pop. let each coat of glaze dry completely and keep them thin, don't let it pool or it will leave a white residue in the recesses. 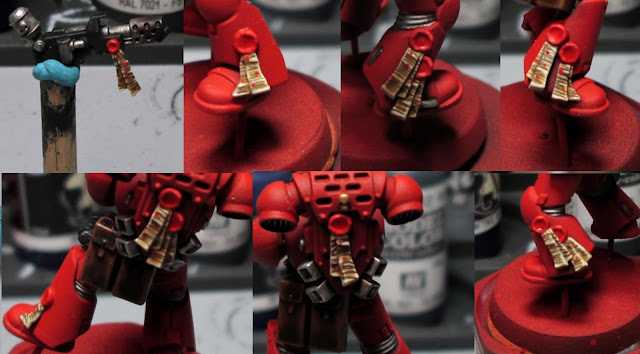 Right now the red doesn't really read against the armour, but once it is weathered and shaded the wax will show as a very vibrant red against a very beaten and dinged crimson. Trust me ;)
Plasma OSL was next AND it was done without an airbrush so don't let all those fancy Youtube videos of OSL with an airbrush stop you from using this great effect! 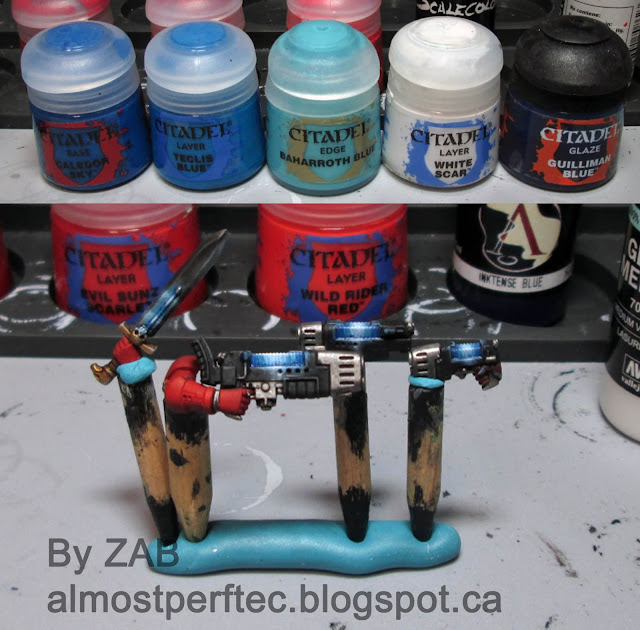 Basecoat the wire on the sword and plasma coils with a few thin coats of Caledor Sky. Layer on a thin coat of Teclis Blue leaving some of the previous color showing. Now layer on some Baharroth Blue in an even smaller area. Repeat in an even smaller area with White Scar. Now glaze the entire area with a thinned layer of Guilliman Blue. Once that is dry do a second heavier glaze of Guilliman Blue in the recesses. When that is dry, drybrush some Teclis Blue around the area you want the glow to be. Take it slow and build it up. Finally, drybrush some White Scar in a smaller are leaving some of the blue from the previous drybrushing showing. Now you have a nice OSL without even needing an airbrush to do it :)
I also applied the decals to all the shoulder pads. I'll go over them with paint later, just using them as guides for my freehand really.

Next post: Armour, chipping and streaking. We are in the home stretch with these guys! Check out the blog roll, go buy some raffle tickets and remember; you can't spell paint without a little pain :)
Posted by Zab on Friday, June 26, 2015