Yep, that's what I did this week. Let me elaborate before I get into the WIP....I took lots of pretty pictures for this weeks post. Then I proceeded to work on them directly from the memory card. The card crashed and took what I had not worked on with it. Now I know better, but I still did it. I won't tell you that I fainted from the shock because only a sissy would faint. At any rate, when I regained consciousness several hours later the pics were still gone.  A victim of my own terminal stupidity.  On to the WIP!
That brown stuff on the base? The new texture paint from Citadel. It's not as useless as the internet claims.  It's actually great for blending into the GW figures that have a texture sculpted on their bases and is far less work than trying to match said sculpted texture with Green Stuff. As for the Finecast... this kit was one of the really top notch examples of how good Finecast can be.  Hell, there were barely even mold lines for me to clean up! Oh, my Dark Eldar were terrible but that made for a few nice conversions and increased my skill with Green Stuff. My Necrons were a fair sight better too and only required a few fixes and hot/cold water treatments to correct the limited warping.  Finecast is getting better in my experience. I still loath anything other than plastic but resin is better than metal - or will be once they get the hang of it;)

This was my first model using the new Citadel paints. I have always liked Citadel and this new range is great.  I've dabbled in other brands but keep coming back to Citadel. It's what I know and like and will keep using predominantly.  Though, if I get into more airbrushing I will try out Vallejo as everyone seems to love it.
Keep in mind these WIPs are taken with my very old Point & Shoot camera. I don't break out the SLR until the finished shots. Don't want to wear it out or The Lady Inquisitor won't be able to continue her "surveillance" of The Agent Of Chaos' sabotage and subterfuge, right? I tend to start with the smallest pieces  which have the same color palette and work my way up... 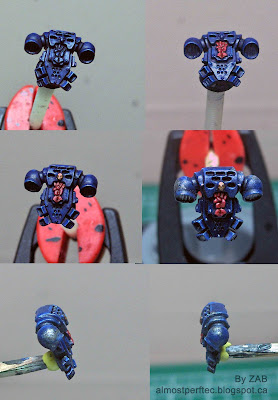 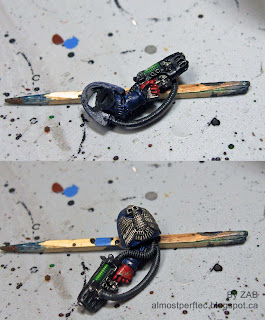 Then I do the rest of the pieces that are from outside the main color palette. Again, ascending size (because I'm so organized and uptight you probably couldn't drag a needle out of my butt with tractor)... 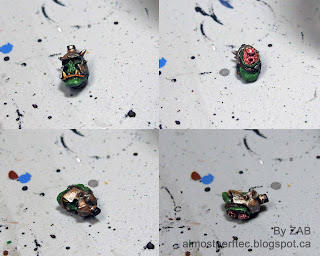 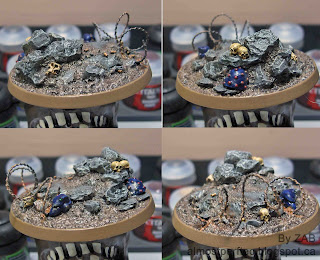 That's all I could salvage from my card. I was going to split this into a few posts but next week I'll likely cover assembly and sealing.  Plus maybe if the stuff I ordered comes in I'll do something neat with a nice resin plinth and some brass etch for the display of this model, but that may have to wait until a future post with the finished pics.

Also upcoming will be the beginnings of my Dark Vengeance journey. I got the limited edition and can't decide on a color scheme so I'll likely do up some test models and include a poll for a few weeks so you can help me escape my own circle of indecision.

I leave you with some questions. I mentioned Vallejo earlier.  Since I live in Canada and can't spray outside in the winter (stupid temperate climate - yay snowboarding is coming - shut up, voices shut up!) and The Lady Inquisitor has banned spraying indoors (Inquisitorial sanctions are no laughing matter) my hobby can take quite a hit in the winter. What say you internet dwellers, about Vallejo's air brush primers in black and grey? Are they durable, are they smelly? Will I need to get a small hobby spray booth (DIY or bought on Amazon depending on funds and laziness)?

Thanks for your time and remember; you can't spell paint without a little pain.