So I needed a break from all the GS and conversion work I put into making my Dark Vengeance Dark Angels into Angels of Redemption. Then I saw that the guys over at Standard Template Construct are running a contest during the month of November. The prize is a chance at one of two $50 gift certificates to Secret Weapon Miniatures. I should mention there is also another contest happening related to the aforementioned contest over at The Chaos Manifesto. Contest contest contest contest, contest :) Anyway, the plan was to buy the mini above and build it straight out of the box and paint it up.  Then I saw this in November's White Dwarf...
Hey now! That could make a great Alpha Legion paint scheme with a little tweaking because I really do like them and I'm still smarting from how my Alpha Legion test model turned out. Another side note; From The Warp has a great Alpha Legion Tutorial up right now, so check that out too (Ron, get out of my head man - you are seriously freaking me out!). I already had my bitz box out and I hadn't put away my sculpting supplies yet so I thought: Let's follow the rabbit down the rabbit hole here... 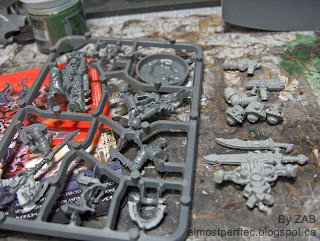 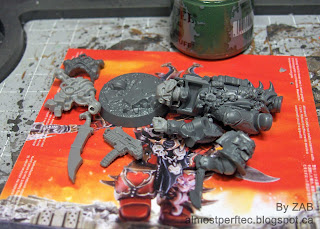 I decided on a few bits to make him look more in keeping with the Alpha Legion. I love the sculpt and I will buy another one to paint up straight out of the box at some point because it's a great model, but a bit too chaotic for my current idea. 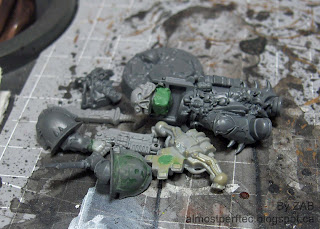 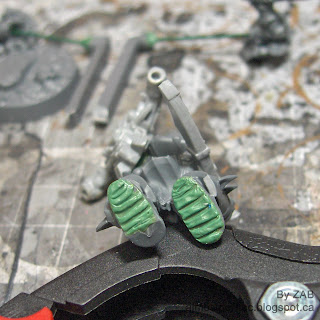 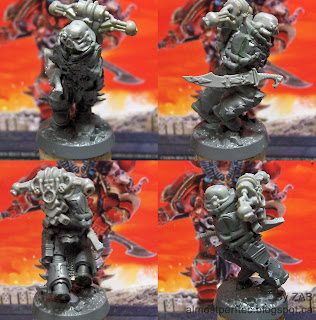 So much for that break from GS work ;)  I now had a reason to try out my newly acquired Vaelljo Acrylic Resin Surface Primer!!! I loved Their matte varnish so I had high hopes...
Once again Vallejo has impressed me. Testy there already has a coat of Painter's Touch Grey Primer on him from earlier this year and as you can see, the Vallejo went on nice and smooth. I used my air brush to apply it, but brushing it on works well too. It's self leveling and a great consistency for brush work right out of the bottle. I thinned it with water a tiny bit for airbrushing. Verdict: Vaelljo is fast becoming a great addition to my painting arsenal and I will be buying more from them in the future. They are right up there with Citadel -whom I hold on a kind of pedestal in terms of great paints. 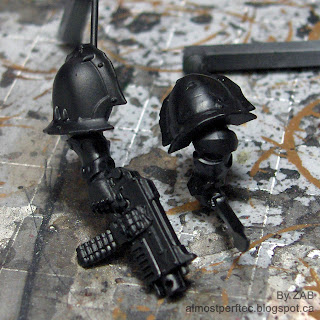 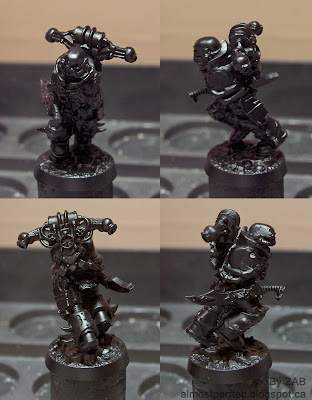 He was ready to paint in minutes! So I got started.  First up is the trim on the armour  I'm doing details first on this guy and his armour and base last. Sometimes I work in the other direction and fill in details last - it really depends on the paint scheme, number of models and level of paint job. 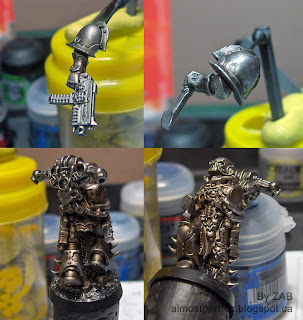 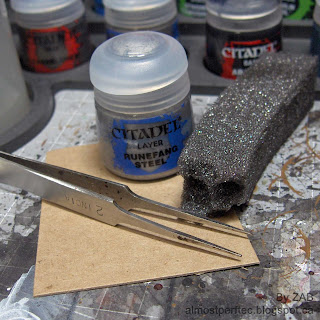 The last step was to sponge on the steel highlight to give it an uneven ancient feel. I know, a lot of work for trim. However, it was fast and it will really pop and look different from the other metals later though. 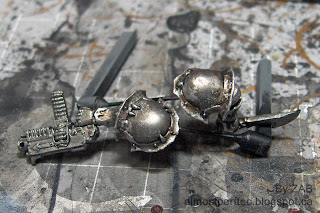 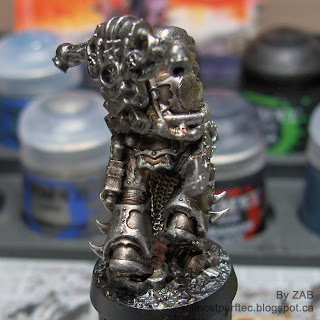 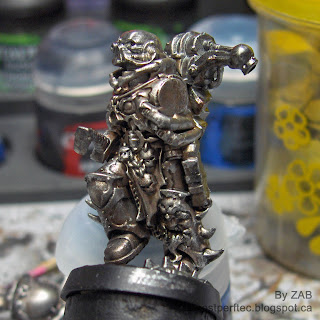 Hell, he looks more like an Iron Warrior now doesn't he? Not for long, I assure you. Thanks for stopping by again. Now, go check out the contests. Below are links in case you missed the embedded ones before or you are just too lazy to scroll back up - you're welcome you lazy bones   0_o

And remember; you can't spell paint without a little pain.