On Display, A Contest & An Auction 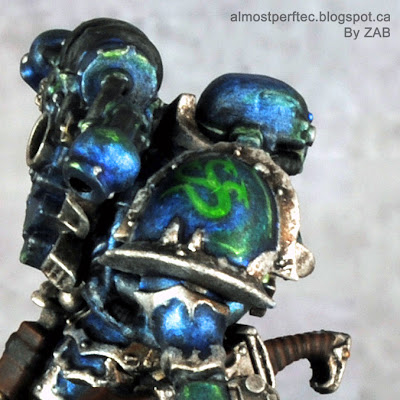 Here is "Alpharius" in all his finished glory.  He's my entry for the STC Champions of Chaos contest. So head on over there and vote for him if you like him. Of course, there are a ton of other really nice entries that you may like to vote for once you see them. So lead with your heart - that's what he would do; he'd lead with your still beating heart (having ripped it from you chest), but hey - that's chaos for ya  o_0 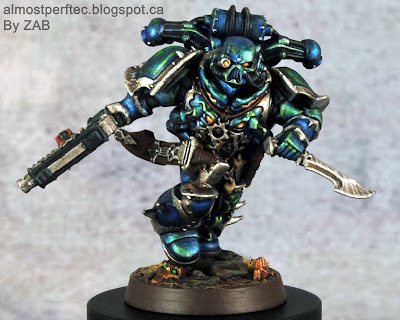 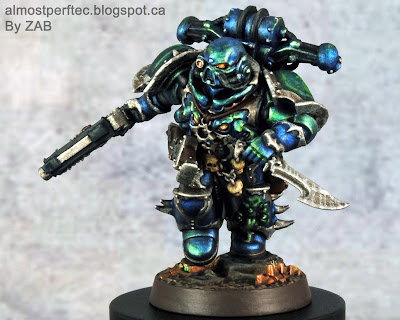 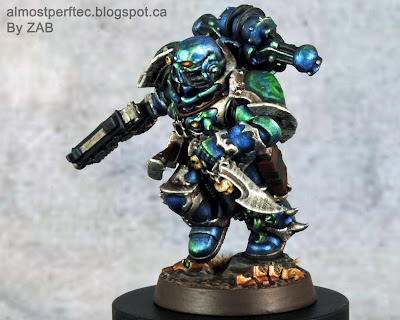 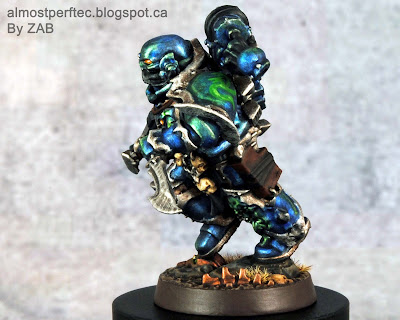 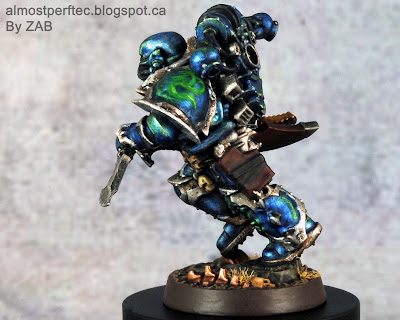 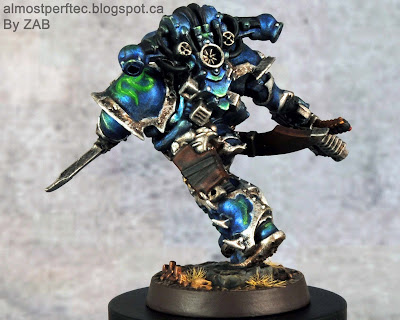 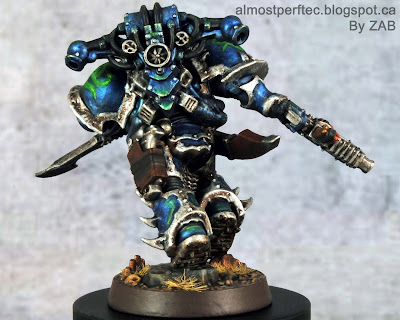 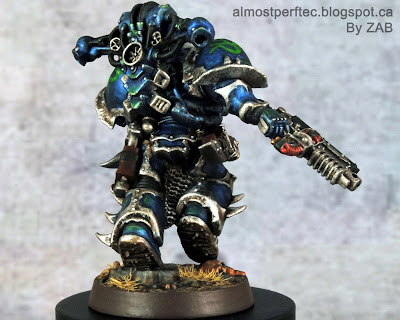 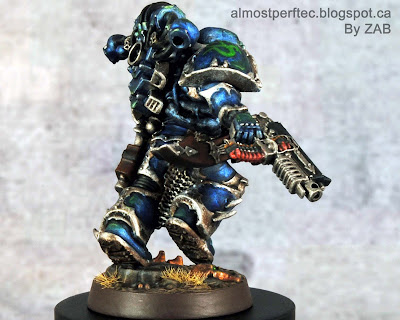 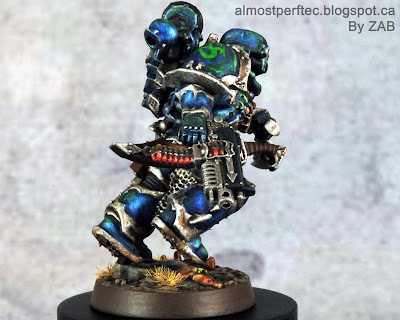 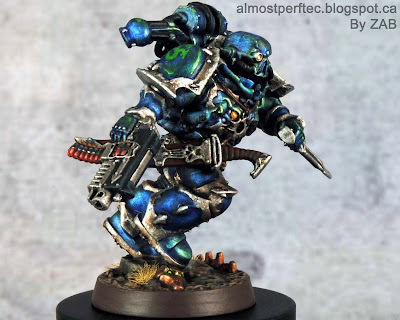 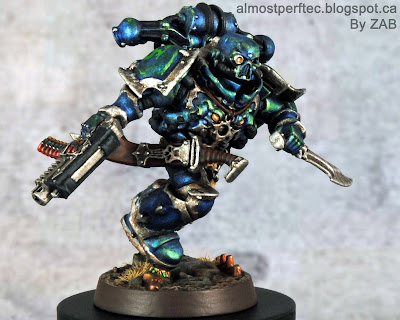 Looks like I am currently in 3rd for best painted and have no votes for best converted, but the conversions are so subtle you wouldn't know them if they weren't pointed out. The original mini & conversion together... 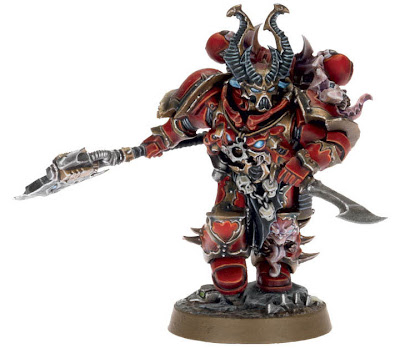 So, from the top down the conversions are:
Head replaced with chaos tank drivers head (not an easy swap if you've ever built this guy).
Backpack replaced with RT era Backpack (again, quite a bit of GS work needed)
Left shoulder pauldron cut down and smoothed out to remove daemon face.
Axe swapped for Bolter.
Sword added to hip.

Now he just screams Alpha Legion. Only quietly, so as not to be discovered while infiltrating the enemy ranks ;)

Onto the auction.  There is an auction taking place over at Tales of a Tabletop Skirmisher. It's for a great cause AND you can own a ZAB original! WHAT?! It's true. The two minis below were painted by me and are up for auction. 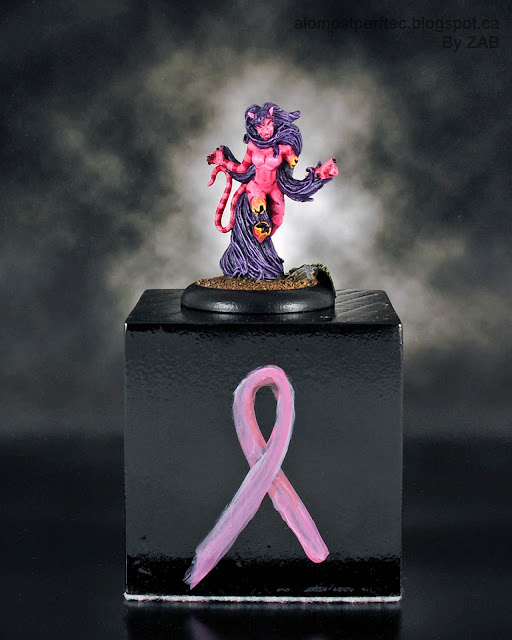 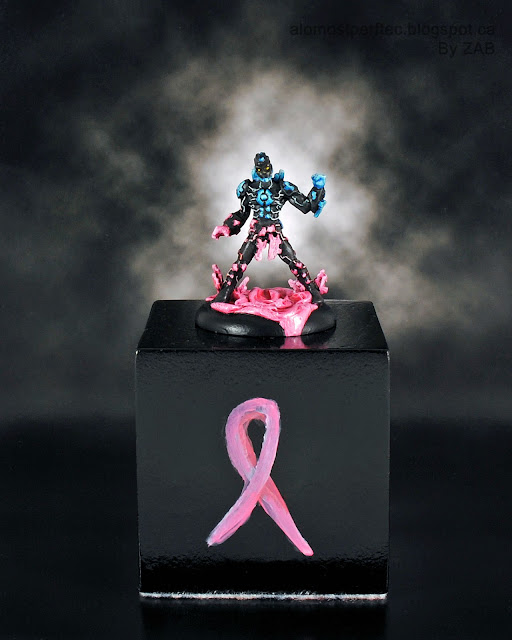 You can see more pretty pictures of them in this old post. Go and bid (generously) because some day I'll be dead, they'll be worth at least whatever they charge for scrap metal in the future and you'll be sorry you missed your chance to capitalize on my demise. Actually, just go help out with a great cause and bid (generously) on anything you like - except the pink Space Hulk Terminator; that one is mine and I will out bid you for it  -_-

Okay, next post I'll have a few shots of how I detailed the bases of my Dark Vengeance set and maybe some shots of the primed minis. FYI: Vallejo surface primers are incredible and you should pick some up if you get the chance.

See you next post and remember; you can't spell paint without a little pain!
Posted by Zab on Saturday, December 08, 2012