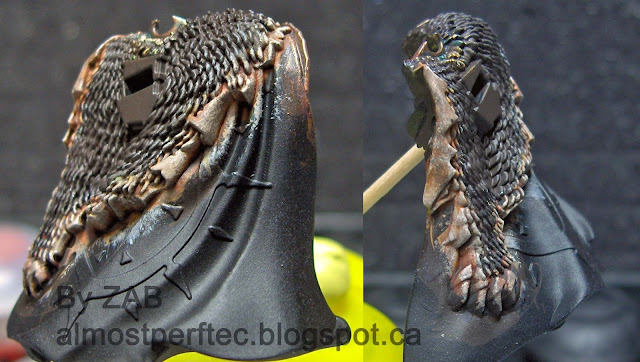 Back to 40k content! After the gold trim was finished on the Chaos Lord it was time for the details (because that is where the Devil is and this is a Chaos Lord after all). I started with the skin on his pelt. The effect was achieved with a sponge technique similar to that used to weather armour to give it a more organic worn look. A base coat of a whatever skin tone you like followed by several layers of sponged on grays, browns and flesh tones and finally a wash of whatever brown you like to tie it all in.  *Credit where credit is due: Brandon Griffith at Drowned in Plastic did it with great effect on a Space Wolf banner several months ago and I have been dying to find a place to use it!*  Next up was the fur... 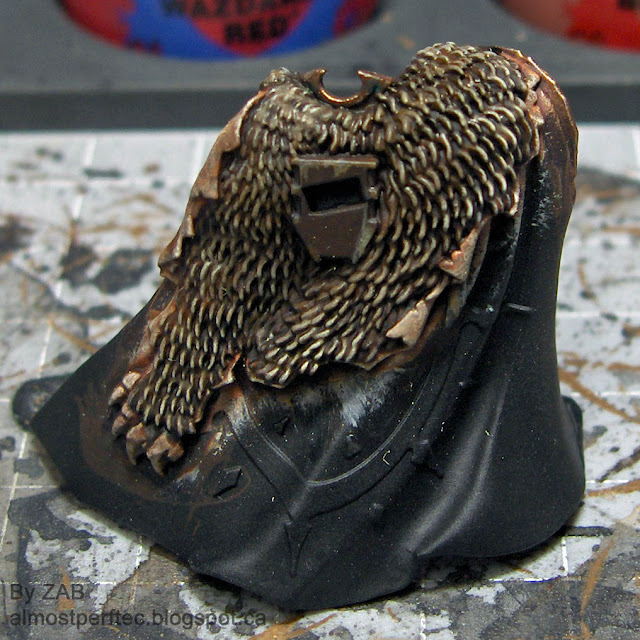 The fur was done with wet blending using various browns and grays and then a few diluted washes of browns and greens (one right after another) to get some interesting color transitions while the washes where still wet. While I had my browns out I decided to do the leather next. 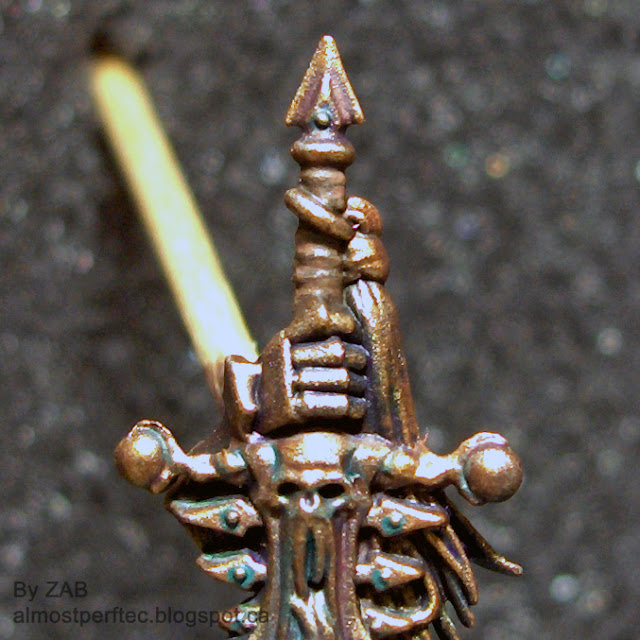 In this shot it barely stands out from the gold but once the armour and other details are done it wont blend in so much. Speaking of other details the cape and tassel on the sword were red-y ;P 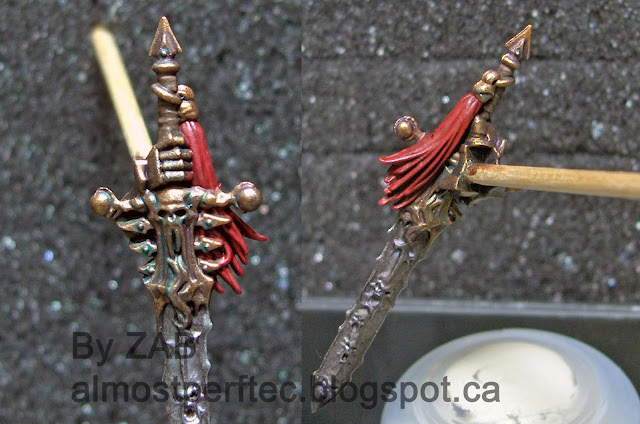 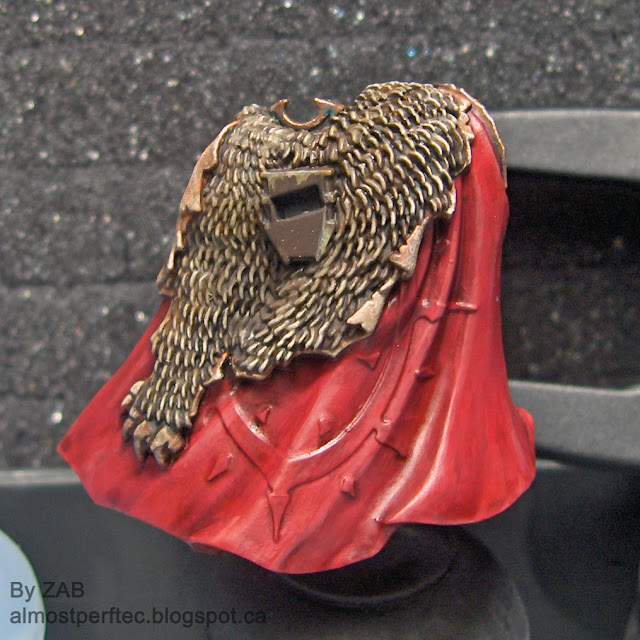 I used a dark red on these and blended up to a ruddy flesh tone, then hit them with a few red glazes and then some red shades in the recesses. To push the shadows and tie into the blue armour later, I used a blue shade in the deepest folds. Next up was the warp growths all over the mini (I kind of hate them and wish I had removed them to simplify the armour because they feel like too much with the baroque armour and all the other details, but I digress). 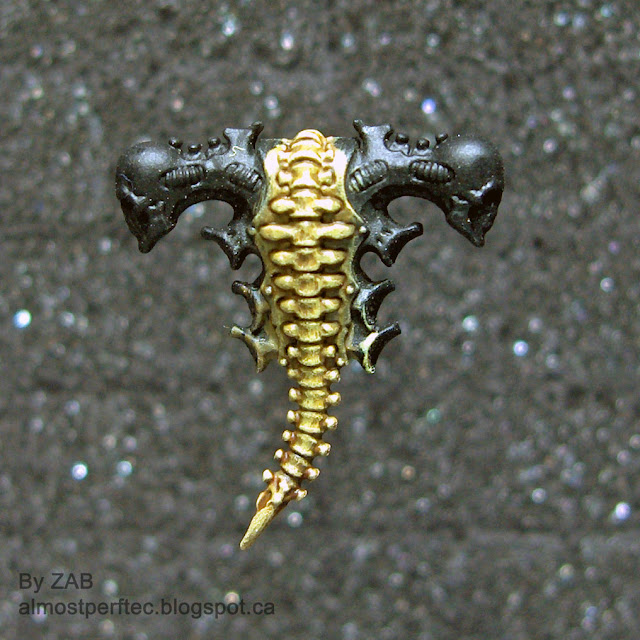 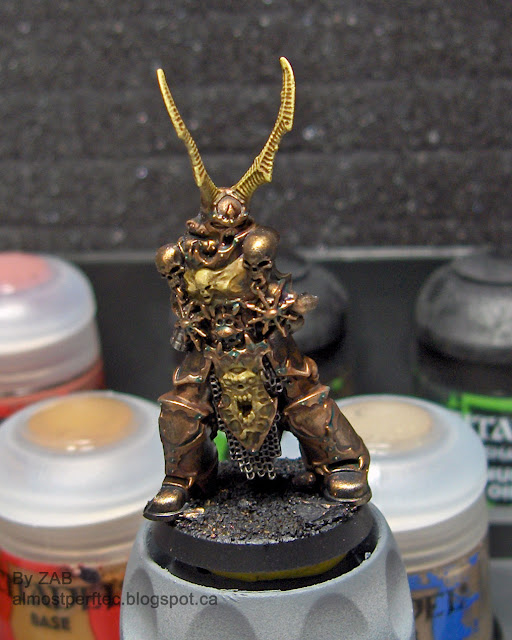 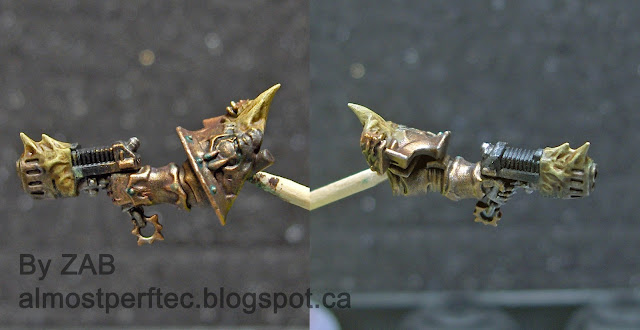 I used a few colours that were greenish brown and sickly looking to represent the tainted nature of the growths. I used a mix of layering, feathering washes and dry brushing to get something bone-like, but more diseased looking. Of course, there are a few skulls on this fellow so naturally bone was the next colour I completed. 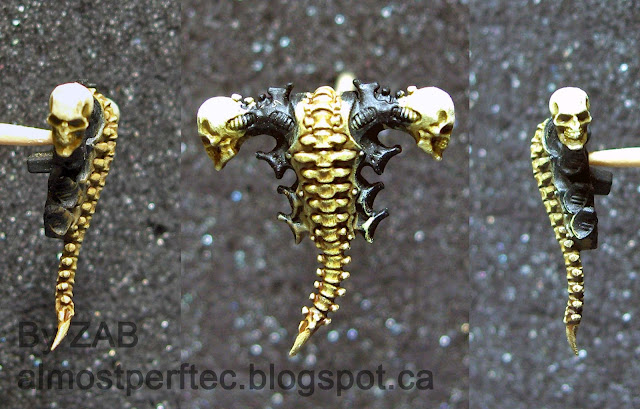 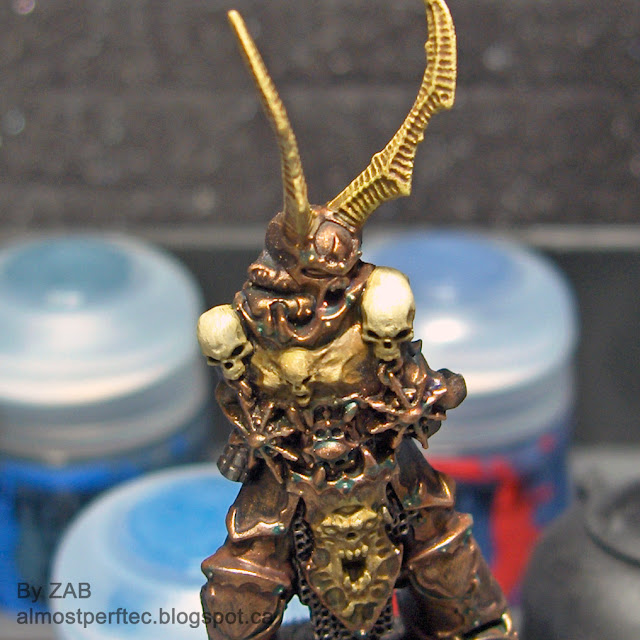 I went fairly stark on the contrast between the bone color and the shading because I wanted them to stand out from the warp growths so they where painted almost all the way up to white and then knocked back with several shades getting progressively darker (almost to black) in the recesses.

That is where I stopped for now.

It all looks rather monochromatic at the moment I'll grant you (with the exception of the red), but it will all come together nicely once the armour is completed. In the meantime, here is what my thumb looked like after a few minutes of wet blending the fur on the cape... 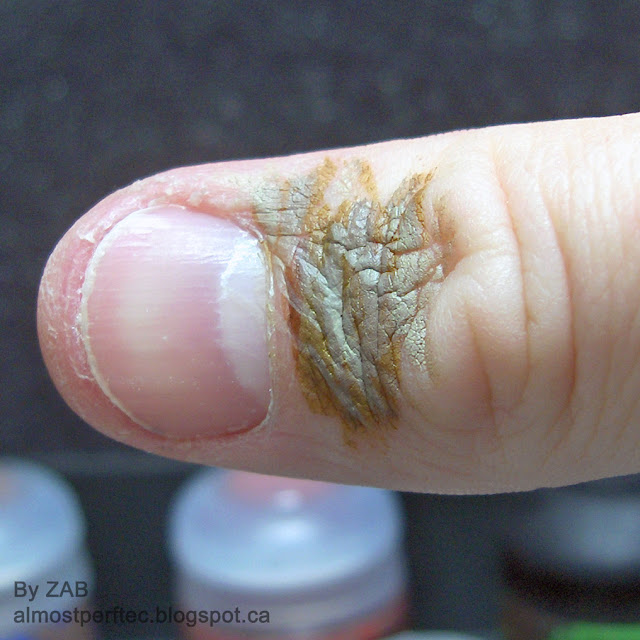 Anyone else unload their brush on their thumbs while blending? Or anywhere else for that matter? Keep that question in mind for the "Thumbs Up Or Bust" giveaway that will be coming as the blog creeps towards the 15,000 pageviews mark...
Next Post: The Chaos Lord's armour and a few other details. Don't forget to check out the blog roll because I stumbled over some really top notch painting blogs this week (Some are in a foreign language that Google Translate butchers quite hilariously, but the pictures alone are worth the visit!) and please comment with any criticism or questions you have on this post below. Thanks for surfing by and remember; you can't spell paint without a little pain!
Posted by Zab on Friday, April 12, 2013